The Caracal is a medium-size wildcat often found roaming the savannas, deserts, and forests of Africa, Central Asia, and Middle East. Its color ranges from tawny or reddish-gold to white on its chin, throat, and underside.

The Caracal cat may not be as regal looking as your standard Domestic cat, but its large pointy ears are a trademark of the species. These pointed black and tufted ears give it an aura of royalty unmatched by other cats in the animal kingdom!

This animal’s ears are like a satellite dish, capable of hearing any sound in the area. It is not just these tufts that can enhance their senses, though – they also have over 20 muscles used to detect and swivel towards sounds from nearby animals or humans, for example. They can use this ability and other movements such as twitches to communicate with others who may be near them.

Hunters of the Karoo, caracals, are masters at stealth. Their sandy-colored coat is a perfect camouflage against their desert home, and with stiff fur cushioning its footpads, this wildcat moves in complete silence.

Caracal cats are a cunning, opportunistic species that is willing to go after anything it can find. They have been known to hunt down and kill prey, including birds, rodents, mongoose, hyraxes, and even small monkeys!

Caracal cat is known to be excellent climbers and can jump up to 10 feet high. It also have thick, hooked claws that they use for catching birds in midair and catching prey like leopards sometimes do.

Caracals have a short gestation period of around 65 days but give birth to as many as four kittens each litter! So they could be mama cats for up to five years before being ready for another cat family.

Females will produce urine marking to signal their readiness for mating, and males who respond from a distance with fighting can gain access. These animals are mostly solitary, but multiple males will stay near females at different times of the year to mate more than once per day on average.

Pregnancy lasts about two and a half months, but mothers will usually use an abandoned burrow of another animal like Aardvark to give birth. Litters average three kittens with six possible maximums, all born blind at first without hearing. Their eyes open around ten days old while their teeth emerge as well.

Females provide most everything needed when raising their children, including resources such as food and shelter that last anywhere between four-six months depending on how quickly each kitten can eat meat instead of milk around one month old before being ready to leave her mother’s care. 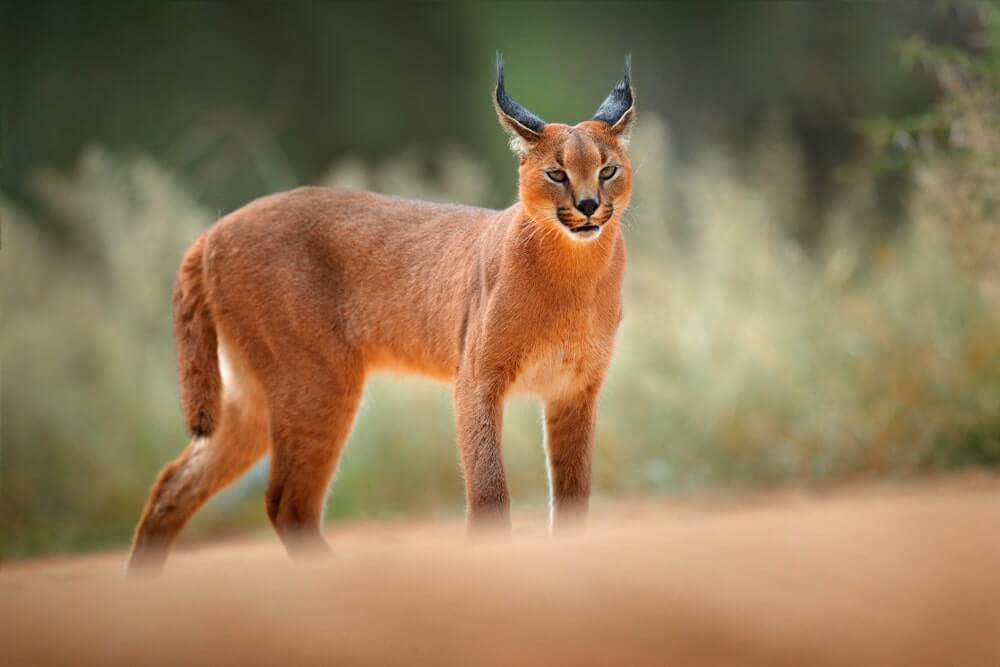 Caracal cat populations seem unaffected by human interference such as agriculture and retaliation killing that is common among other big cat species worldwide; however, they still face some risks that have yet to be studied extensively – namely habitat destruction due to agricultural expansion.

The Caracal cat, also known as the Desert Lynx or African Golden Cat, is a small cat found from India and Africa to Saudi Arabia. The species may look like it’s been drawn by Dr. Seuss due to its big eyes with black circles around them, but they’re quite ferocious! They prey on birds such as Ostriches, so you never want one coming after your chickens in their coop! In some parts of Namibia and South Africa, landowners are legally permitted to kill these cats when they pose a threat- which has lead many farmers who were once fearful for their livestock lives now feel less threatened knowing that this animal can be removed at any time should it prove dangerous again.