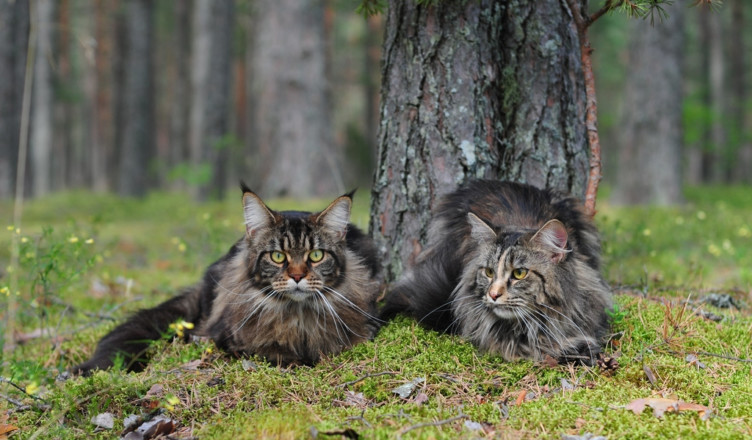 The Maine Coon personality is unique among all the different feline breeds. It’s not always easy to make generalizations because every cat has its own idiosyncrasies too, so I’ve jotted down my observations about the dominant Maine Coon characteristics I’ve seen in our house over the years.

When I’ve been struck down by the flu or a sickness bug, Henry is always close by – and willing to provide some comfort. I don’t think this is a specific trait of just Henry but it’s a good example of the Maine Coon personality in my experience.

The Florida Sun-Sentinel reported on the story of two Maine Coons, Diesel and Charlie Girl, two trained and registered therapy cats.
Dogs aren’t the only registered “helping animals” out there. Diesel and Charlie Girl practice a special breed of medicine at a Fort Lauderdale hospital and a veteran’s nursing home. Dr. Lisa Radosa says, “Cats raised more like dogs and breeds that have an easygoing temperament, such as the Maine Coon breed, can make fine therapy animals. For them, being petted or being next to someone is rewarding. And their owners are giving them little treats, training them to enjoy the visits,” she said. “Of course the cats want to go back.”

The article also mentions a cat (although not a Maine Coon) called Oscar, who lived in a Rhode Island nursing home’s Alzheimer’s disease unit, was a subject of a widely reported essay in the New England Journal of Medicine. Oscar sensed when patients only had a few hours to live and would curl up next to them on their beds. His predictions were so accurate that staff began alerting family members that death might be near.” Amazing feline!

Anyway back to the protective Maine Coon personality, I would describe Henry as my emotional crutch at times. I wouldn’t call him the most affectionate cat in the world but he accepts that a cuddle from his owner is part of his job role:) He shows other ways of lifting my mood too e.g. when I blink at him, he will blink back – I read somewhere that that means he loves me (or that’s what I like to think anyway – or that he understands me).

Sometimes, even when the house is chaotic with toys all over the floor and the kids are fighting and I’m feeling exhausted, he will quietly sit next to me on the arm of the sofa and rub his head against mine. It just seems to give me a little boost to keep going and to remind me that I’m very lucky to have happy healthy children – of the two and four-legged variety!

Henry is definitely a sensitive soul and always picks up on tensions, moods, and illnesses within the house. I doubt this is really a Maine Coon personality trait or characteristic but he is such a brilliant baby monitor that I never really needed to use an electronic one when the children were babies.

I’ve never lived with a cat that is so brilliant at communicating with the Coon cat. Ours sleeps for most of the day so that he is ready for go ‘on-duty’ at the children’s bedtime. For most of the evening, he will sit in the hallway between both children’s rooms and if either one needs attention, he simply has to pop his head around the lounge door and chirp and let us know we need to go upstairs to deal with a waking child. He always follows us back up the stairs and goes back on duty once they are settled. This doesn’t just happen ‘once in a blue moon’ but EVERY night. We’ve recently started calling him ‘The Godfather’!

Maine Coons will happily sit with children and may join in some of the games – especially if they involve balls rolling around the floor!. Our cats will tolerate most things and if they are pulled about too much they will warn the kids by pushing them away with a padded paw.

This was the original role we first saw Henry adopt and other Maine Coon lovers agree this is a dominant characteristic, which makes the  Maine Coon

However, there are many occasions when he feels the need to interfere – especially if we have visitors or workers in the house. He thinks it is his role in inspecting visitor’s handbags and luggage and sniff clothing. I’m not sure what exactly he is looking for but he seems to carry out a more thorough job of people who dislike cats – maybe he senses their suspicion of him.

He takes an interest in anyone who interferes with the contents of his house e.g. during one visit, the man who fixes the computer nervously deleted the computer virus with the supervisor looking over his shoulder. Whenever he wrote any notes on his pad, he had to accept Henry would lend a helping hand (or big brown furry paw). The next time he came around he said was so enamored by the Maine Coon personality that he wanted to get one too!