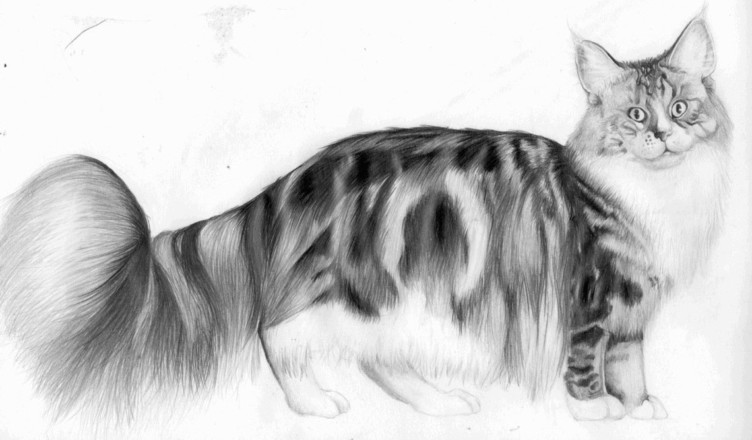 OK, so the Maine Coon is THE Biggest Cat of the domestic cat breeds, a male typically weighs between 9 to 18 pounds, although we see the biggest Maine Coon boys much bigger than this. With their muscular body frame and 2 to 3 inches of long hair, they always look bigger too. Their tails are usually at least as long as the length of the body.

Generally, a big Maine Coon can be expected to grow up to 30/35 inches in length, with their tails being up to 14 inches long. The Coon cat is not fully grown until it reaches between 3 to 5 years of age, so a younger cat has a lot of growing up to do until it reaches maturity.

What is the record for the biggest domestic cat?

There have been world record holders for the heaviest cat, though the Guinness World Records eliminated this title because of reports that cat owners were purposely over feeding their cats to try and break the record. Before the record was eliminated, there were three cats recorded with the heaviest weight. First was Himmey, a neutered tabby living in Australia, who weighed 46 lbs., 15.25 oz. Another named Poppa, an 11-year-old tabby, weighed 44.5 lbs. Lastly, there was Tiger, a long-haired part-Persian, weighing 43 lbs.

What is the record for the biggest Maine Coon cat?

That honor goes to Verismo Leonetti Reserve Red. This large Maine Coon was titled the 2006 Guinness World Record Holder for Longest Cat. Leo is a purebred domestic cat with a CFA pedigree. He measures 40 inches from the tip of his nose to the end of his tail. He weighs 35 pounds, which is almost twice the size reported average for the breed. However, the record title is for his length, and not his weight.

A news report with the cat’s owner, Frieda Ireland, and the vet, Doctor Rovner confirms a healthy Maine Coon! Though he is the longest cat and above average in weight, he is his natural size and not overweight. Leo has a larger body frame, which can easily carry the extra pounds.

Guinness compares Verismo Leonetti Reserve Red to the same size as an eight-year-old child. Leo’s paw would fit into a child’s size two shoe. Leo won the record after beating the last record Guinness World Record holder, named Snowbie. Leo won by a full 6 inches in length over Snowbie so is officially the biggest Maine Coon ever?

At the time of writing, I haven’t been able to source a picture of Leo – if you know how I could find a picture of Leo or any other very large Maine Coon cat pictures for this site please let me know…

Perhaps your MC is a large Maine Coon? share photos

Next>>>Information on the black Maine Coon

BACK TO HOME PAGE >>Maine Coon