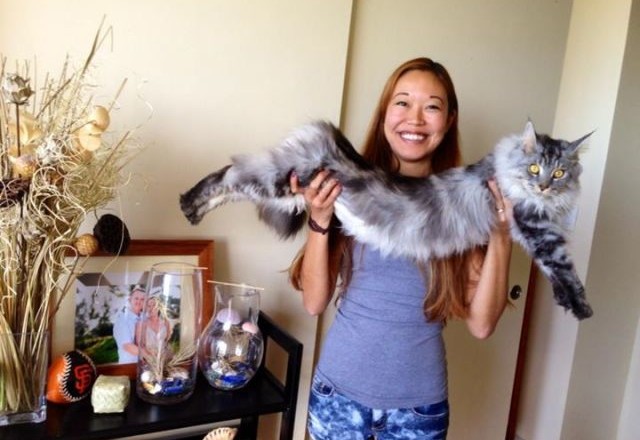 I titled this article, Maine Coon cats, kittens and the rest of the family because it’s a story for anyone thinking of introducing a new kitten into a family environment where there is already a Maine Coon in residence. This is how our oldest Maine Coon (King Henry) coped with a new kitten arriving in addition to an eighteen-month-old and a newborn baby.

A few years ago, our new male silver blotched tabby kitten (The Jester) came to live with us. King Henry sensed something was happening even before he arrived and started pulling his fur out again. He is very territorial and is very sensitive to any changes in the household. He developed a large raw patch of skin on the back of his neck that we were treating with cream from the vets.

The cream healed the sores slowly but Henry’s mood remained low and so we decided to try using ‘Feliway’ again – a liquid that can be plugged into the wall to release pheromones. If you’re not familiar with it comes in a spray bottle, and as a plug-in like an air freshener.

We knew it would help, as it seemed to help his mood him when our first son was born back in 2005. He seemed to be feeling a bit left out then, and it showed in his general demeanor.

Anyway, when we tried to introduce the new kitten, the intensity of the hostility from the King towards The Jester took me by surprise.

It took a while for Henry to accept the new arrival – 15 days to be precise. We kept them separate for most of this time but gently encouraged integration. At the beginning, we allowed both cats to spend time in each other’s environments to get used to each other’s smells and later allowed them to meet up for short periods. Henry hissed spat and wiped Jester and any human that came near him at first. I was worried that our 12-month baby (a little unsteady on his feet at the time) might get in the way and be hurt as a result of Henry’s temper.

I decided not to allow myself to become attached to the new kitten in case Henry did not accept him. It was touch and go for a few days. He was soo aggressive I just couldn’t see it working out at the time. And it was unsettling for everyone. I thought we’d made a big mistake.

The breeder had already kindly agreed to take Jester back if need be.

Eventually, thanks to a rather slow and nerve-racking ritual of slowly letting Henry see the new kitten, for a little while longer each day, things did show signs of improving. It was actually when we plugged the Feliway in near Henry’s tree that we began to see some real breakthroughs.

We offered lots of gentle encouragement and affection towards Henry and things settled down. The furry boys are now the best of friends and Henry is much less demanding for human attention and enjoys his ‘rough and tumble’ moments with his new playmate. I think he realized the benefits of an adopted brother when he received a super deluxe 3-story scratching post for Christmas that year!