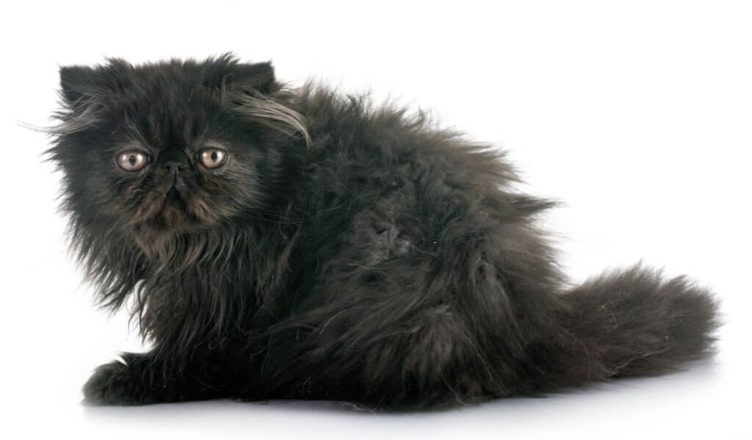 Interested in black Persian cat? Get an overview of the exotic Persian with a black coat in our breed information guide.

With its look of oriental mystique, the black Persian cat is a rather rare variety among the Persian cat family. Nevertheless, the black coat is one of the most sought after colors by cat lovers around the world.

You will be able to find a considerable variety with the shade of black on the coat of the Persian cat. From the toned down moggie black to the pure black Tuxedo Persian cat, the different shades have a totally distinct feel. Similarly, you will find the coat of the black Persian to vary in terms of its texture.

In some cases, the coat will consist of incredibly long and remarkably silky hair. On the other hand, there are extremely fluffy looking black Persian cats that have a woolly texture to their coats. Cat lovers have different preferences and a variety of styles to choose from.

The black Persian cat is available in two varieties of eye color. One variety has deep blue eyes whereas the other displays a set of contrasting orange copper eyes. The blue-eyed black Persian seems to have an overall complementary look whereas the orange eyes stand out in sharp contrast with the black coat.

What makes the black Persian black?

Everybody knows that the black Persian gets its colors from its genes. To be more specific, however, the black coat gets its color due to the pigmentation present in the fur which absorbs a considerable amount of light. This is quite the opposite of what happens in the case of white Persians where the light is actually reflected.

The black Persian is categorized among the solids. Other cats in the series are blue, fawn, chocolate, lilac and the like. The Persian cat has microscopic granules in its hair through which the light is absorbed. These spherical shaped granules are known as eumelanin.

It can be quite a challenge for Persian cat breeders to develop a pure black coat. More than often they will end up with a rusty brown tinge in the black coat. Such cats are then excluded from the breeding pool.

The sunlight is another factor that influences the blackness of the Persian cat’s coat. A combination of sunlight with saliva actually works to oxidize the pigmentation. As a result, a brown tinge develops in the black coat which is considered to be undesirable.

Some cat lovers are fascinated by the black Persian’s gothic and surreal look whereas others consider it to be an exotic cat with a sultry appearance. Irrespective of the different perceptions people have there is no doubt about the fact that the black Persian cat is the most sought after cats from the Persian family.